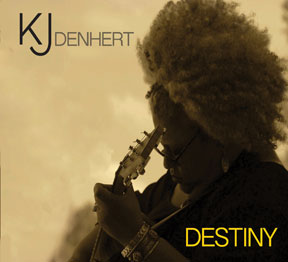 The variety of musical styles and performances on KJ’s new album are tied together by her singular personality and straight forward lyrics brimming with honesty.

A person often meets his destiny on the road he took to avoid it.

The album Destiny is simply my awakening. Moving away from outmoded ideas, I accepted that life and people are not particularly logical, in fact they are more often illogical. Once I truly accepted that in my heart, the songs wrote themselves. When I thought I was done, one more song emerged with a lyric that wound up summarizing everything else. That song is a Live Bonus track called One Day: Good for you and good for me, what happened next I really didn’t see.

When I feel alone and I think my days are numbered
And I ask myself, is this all I want
Are you calling me
Oh Destiny

I live in a box of my own design
I and I alone would be hard pressed to tell you why
Twenty three years and counting, teaching on the front line
I got laid off this summer, my first time on the line
(What am I going to do)

Wish I had someone, that I could blame
and play the blame game
One reckless instant might blow it all
(What am I going to do)

Anelise closed her eyes
Took her hands off of the wheel, tried not to die
When the police finally arrived
They shook their heads and said it’s a wonder she survived

I want to live- I don’t want to die

If I were to try to tell you the reasons why
I think you’re beautiful, beautiful.
Would you roll your eyes and walk away
And tell me not to say things like that.

So I must ask why,
Under a starry sky,
Don’t you feel beautiful, beautiful
Beautiful as this night, beautiful because

Ageless is beauty that whispers and follows the songs that the heart, like a madman, assembles sometimes

My, once in awhile, my darkness subsides and then I realize
That it is beautiful, beautiful to be by your side while Venus lights the velvet sky
It’s your time of year

So, darling take care, treasure your blue(s), and all that you’re meant to do
And you’ll feel beautiful, so beautiful,

(Modulation) Beautiful as this night, beautiful because

Ageless is beauty that whispers and follows the songs that the heart, like a madman, assembles
Beauty is ageless it’s you she resembles and leaves me believing that beautiful is all that you do.

I have changed
Rearranged
My world is not the same…

I live so many miles away from where we met
I dreamed in teal and green and to the ocean I went
So goodbye, goodbye my sunny friend

One day I bought myself a book
I told myself I ‘d learn to cook
Cook for you and cook for me
What happened next I really did not see.

All songs written by KJ Denhert except Do You Love – Nicki Denner, Marissa Dodge.

I Don’t Think So

Written in St. Barthelemy during our annual stay. I saw a guy that looked like friend and guitarist Francis Jacob and another like my brother. I noticed everybody was looking at their phones. We’re all going through something and I thought perhaps we are all hiding behind our devices.

About acceptance and intuition. I am following a calling and wind up following my intuition only to realize that’s all you can do.

Inspired by the story of a friend who had a traumatic accident. I didn’t plan to write a song about it. This lyric came to mind in one complete piece – “Ann Elise, close your eyes, take your hands off of the wheel and try to fly.” I wanted real feelings with a very happy chorus, because it was a joyous relief that that our friend survived.

A song written by the brilliant pianist Nicki Denner, with lyrics by the talented Marissa Dodge. I used to sing it at a weekly trio gig with Nicki and bassist Jennifer Vincent. I love the song’s haunting melody. It’s about world leaders whose decisions impact the lives of so many innocent people. It was the first recorded session for this record.

So The Story Goes

About being reconnected with my family in Grenada. It’s a shame I didn’t get to live in the same country as my grandmother or her eight brothers and sisters who were all musicians. Grande Anse is the name of a beautiful white sand beach in Grenada. Simpson’s Alley was next to my Grandparents home in St. Georges.

Reprised from the Lucky 7 album with a chance for Nicki to stretch out at the end. There are so many people who are uncomfortable with a compliment, especially being called beautiful. This song was written for one such person, but is relevant to all of us struggling to accept our gifts.

Talks about the normal day to day frustrations in my life. I heard morning anchor Mika Brezhinski refer to how often women say sorry and wrote a blues song riffing on the word and concept. I am sorry that sorry doesn’t mean that much anymore.

Iimprovised at the session. I wanted to go somewhere new musically so I asked Mamadou to play me a riff. I sang the chorus of the Stones Satisfaction in the session but didn’t want to get delayed seeking the rights, so I used the lyrics from Destiny instead.

An old-fashioned love song. I wanted to write something A.T.N could get into in an old-school, Stevie Wonder kind of way. I called in the background vocalists I knew could make it pop, (Angela Clemmons and Vaneese Thomas) and Aaron Heick really nails the retro feel with his sax.

I have a good friend on St. Barth that I see once a year on tour. On our final day, I had last day blues and the rooster was crowing next door. I was expected for lunch at her house, but I was late because I was recording this simple riff on my laptop. I played it for the band in the St. Maarten airport and recorded it a few days later.

I Don’t Think So

A reprise longer version of the song that opens the record. It’s an edgier remix that I like. Ray and Koko rocked it.

About the best intentions leading to unexpected outcomes. It was recorded live at Martin Cohen’s Congahead studio in the summer of 2013, reuniting us with Koko Jones and John Caban. It has that raw first take recorded energy. The vocal pedal that I won in the John Lennon Songwriting contest gives it that sound.

My heartfelt thanks to the band, the fans, and friends that make my dreams come true.