I certainly have a lot to be thankful for- the new website is here and ready for a test drive! Huge thanks and praise to Janice Bond and Liqui-Site Designs for making this happen, and happen on schedule!! Also arriving today is a very cool video update from Emmy award winning editor Rob Weir from The Big House Production Group. Please have a look. The first draft arrived this morning in my inbox. I have to say I love it so much that I made no edits beyond adding my logo and said this has to go up today! Special thanks to Jackie Weir, the director, that I discovered in my hometown. Actually Jackie discovered me at a concert here in Ossining and we had lunch at her suggestion- boy am I glad. Another big up to musician and first time collaborator Tomas Doncker, whose terrific energy you’ll notice immediately in the video update, filmed at Hal Winer’s Bicoastal Studio’s also in Ossining. 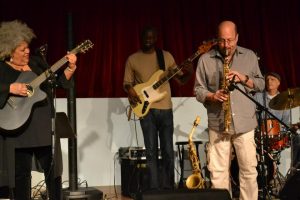 I’ve been calling November my new song month but it’s been a lot more, it’s my new challenge month, it’s been my perform at no less than five
benefits month. It’s been a farewell to old friends month as we paid tribute to singer-songwriter Terence Martin whose untimely passing has left me saddened but motivated after sharing so many evenings within the great community of musicians and singer songwriters in Wetschester, New York and beyond, who paid tribute to Terence. On Nov 20th – I posted in Facebook “Happiness is playing your hometown with your very own band”. When you see the photos that Ellen Marzelli took you’ll see the joy. As the band came on stage to a full house at The Budarz Theatre, in the Ossining Public Library, I almost started to cry. I have Alan Marzelli and Jen Chapin to thank for this!

There is so much more to tell and do. I couldn’t be more pleased to begin the journey that will be the next recording and the celebration of a fifteen year anniversary which will take us to many places around the world in 2012. I wish you all a happy Thanksgiving and will close by thanking the many uber-talented musicians who have supported me as members of my band loosely known at the New York Unit. In truth we are family now. For this I am unspeakably thankful.

———
Before closing this note I would like to honor the memory of a great musician & producer, Ned Mann, who would have celebrated his birthday today, he produced Girl Like Me or my fourth album and was a brilliant and compassionate man. I cannot escape the coincidence of today being the first birthday since his passing. May I direct you to his writing on the subject of Acceptance, Forgiveness, Gratitude & Hope 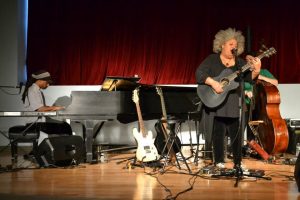