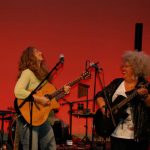 On March 16th I am celebrating a 15 Year Anniversary with my band, the New York Unit.  I’ve got a brand new EP called Destiny  that should arrive in time for the special  Spotlight Concert at Tribeca PAC. The concert will musically  take a look back at some of the songs and people who have inspired these milestones.  These are the program notes for the concert:

KJ Denhert
An award-winning singer-songwriter and bandleader, KJ Denhert is making a name for herself around the world and at home in NYC. She has a thirteen year ongoing residency at the legendary 55 Bar in New York’s West Village and has been an artist- in- residence for eight seasons at The Umbria Jazz Festival in Italy, returning with her band in July 2012. She has performed in St. Barth in the French West Indies each January for the last eleven years. On Saturday mornings this spring KJ is performing with a trio of  New York all-stars at Smoke Jazz  Club on the upper west side.  A self taught guitarist, she remains relevant to jazz, R&B, blues & folk music with a style she calls Urban Folk and Jazz. KJ Denhert has earned multiple Independent Music Awards and in 2009 she was named one of Jazz.com’s top female vocalists. She’s just received a John Lennon Songwriting Contest award for her reggae anthem Choose Your Weapon. She has nine albums and a new EP with the full length album Destiny due later in 2012.

In 1996, KJ moved back to New York City and Jen Chapin’s band was the one to watch ! A lasting friendship of mutual respect ensued. KJ invited Jen’s band to perform at her very first CD release party. Many musicians that have played and recorded with Jen have appeared in the New York  Unit. Jen Chapin’s music is urban folk soul.  Critics have hailed her work as “brilliant.. soulfully poetic” (NPR), “thoughtful.. worth-savoring. Using the highest form of flattery, KJ stole the term ‘urban folk’ from Jen en route to defining her own style as urban folk and jazz! www.jenchapin.com

KJ & Vicki met in college and began to perform and write together almost immediately.  In the 80’s they reunited to form a duo called The Life.  KJ credits Vicki Genfan with raising the bar for guitar playing and musicianship from an early age and helping to make KJ who she is today.  In  2008 Guitar Player Magazine crowned Vicki Genfan “Guitar Player’s Superstar”.  Vicki has several brilliant albums and instructional videos available at www.vickigenfan.com

KJ and Adam met in 2004 and began sharing guitar licks and tea in the parlor which lead to a CD called The Songwriters Notebook, a tour of St. Barth and KJ’s second Independent Music Award nomination.  Adam is a storied singer songwriter, one of New York City’s most sought after session and touring guitarists. He has worked with Phyllis Hyman, Will Downing, Jonathan Butler, Sophie B. Hawkins, Roberta Flack, George Benson, Arif Mardin, and Robert Palmer to name a few. www.adamfalcon.com

Tomas and KJ met in 2011 when the club owner from St. Barth’s Baz Bar brought Tomas to hear KJ at The 55 Bar. The enthusiasm exchanged between the two lead quickly to co-producing and recording two songs from KJ’s brand new EP Destiny. Tomas Doncker’s third CD, Power of the Trinity began as a meditation on the life and legend of the Ethiopian emperor Haile Selassie and is available now at www.tomasdoncker.net

Who is playing in the NY Unit on March 16?

Mamadou has performed with KJ since 1996, the senior member of the NY Unit. They met when he was playing with Jen Chapin at CB’s Gallery. Born in Dakar Senegal,  Mr. Ba is a self taught bassist who  came to prominence touring Europe and Africa before emigrating to the US. He went on to become the musical director for the Harry Bellafonte band and has appeared and recorded with a number of  top artists including Regina Carter, Malika Zarra and Leni Stern. A black belt in karate, he is a gentle giant who brings impeccable groove to KJ’s music and has inspired her to keep moving forward over the last fifteen years.

Ray joined the NY Unit in late 1997. It was Ray who suggested that KJ try to get a gig at The 55 Bar, which led to the residency of over thirteen years. He remains in the first chair position as drummer since he joined. His inspirational story has been featured in Modern Drummer magazine. Ray has recorded a jazz album with a number of high profile guest musicians like Mike Stern, John Abercronbie and vibraphonist, Joe Locke to name a few. He has appeared on seven of  KJ’s albums, has a great sense of humor and keeps KJ laughing on the road. www.raylevier.com

KJ first heard Aaron while being inspired by the Richard Bona Band at the Izzy Bar in the late 90’s. Aaron joined the NY Unit in 2007 and was featured on the 2008 album Dal Vivo a Umbria Jazz.  He also appears on KJ’s Album No.9.  After recording with Chaka’ Kahn, Aaron was invited to join the Chaka Kahn band and toured for eight years! From there he went on to tour with Richard Bona for eight years. This year alone  Aaron has recorded with Steely Dan, Sting and has a regular chair in the Broadway sensation Spiderman. He performs regularly at the 55 Bar and will join KJ on her return to the Umbria Jazz Festival this July. He has recently released his first solo CD Daylight and Darkness. www.aaronheick.com

Koko joined the NY Unit in 2007. Signed to the same label, Koko was then leader of the Latin – jazz band, 10th World after spending years with The Isley Brothers and Whitney Houston in the eighties. In late 2010, Koko, who was previously known as Kevin Jones made the brave decision to come out as a transgender musician and changed her name officially to Koko Jones in 2011 marking her transition. She continues to appear regularly at the 55 Bar with KJ and is working on her own CD and stage show to tell her remarkable story. www.kokojones.com

On piano and keys, Adam is the newest addition to the NY Unit. In 2010 he jumped in seamlessly, adding a burst of what we call “the full  Klipple” bringing his dynamism to the band. He appears for the first time on Destiny and in the live video recorded in St. Barth. Adam is a band leader of several projects and a producer living in Brooklyn with his family. He has performed with the Sun Ra Arkestra and has toured with Lauren Hill. www.adamklipple.com